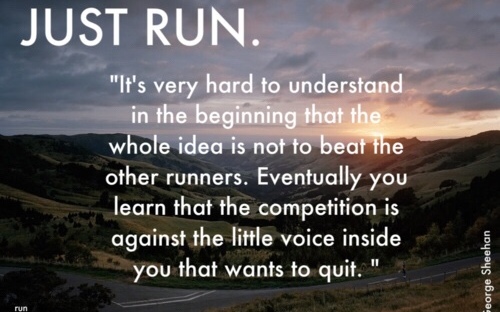 One of my goals for 2018 is to run a sub 2 hour half marathon. My first attempt is Alloa Half Marathon which is 5 weeks from now.

I really wanted to reach my goal at this particular race because a) Alloa Half was my first race also it was the reason I started running back in 2015 b) I really should have claimed that sub2 at Alloa last year but I had a shit race and I’m clearly still annoyed about that!

The truth is though, it’s not going to happen I’m still far too slow, in fact the last couple of weeks I’ve been even slower. I ran everyday in January to kick start my running after MONTHS off but I think that just made things worse as running in February so far has been nothing more than extremely fatigued legs.

I had a terrible run yesterday I was slow, I had stomach cramps, I fell twice and a random dog tried to hump my leg. Mentally, I ended up so frustrated with my pace, annoyed that I had even set myself a stupid goal and angry with myself for not training better (also felt slightly violated by random dog).

Hold Up! I run to clear my head not mentally torture myself. One thing I kept saying to myself when I was struggling to run was ‘How the hell did I run a marathon?’ and so tonight I decided to read back my training posts to find out.

I was instantly reminded of all the terrible runs (there were a lot!) of all the times my running group were so far ahead I couldn’t even see them (almost every week!) of all the aches and pains, highs and lows but mostly what stood out was that I kept showing up. I don’t think I ever stuck at anything or worked for anything as hard as I did for that marathon. Looking back I doubted myself every week but I did it.

I’m so glad I tracked my training on the blog, it was just the pep talk I needed. I definitely won’t get my sub2 at Alloa in 5 weeks but that’s ok, I can try again at the next one.

What do you do when you feel like a goal is not achievable?

19 thoughts on “Goals, a pep talk and a pervert dog”