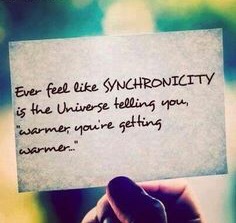 Have you ever had a coincidence happen to you that made you feel like it was meant to be? A sign from the universe or some other higher power perhaps?

The numbers 11 11 and 16 07  frequently show up for me, usually  it’s the time I happen to look at the clock but they do pop up other places too.  My birthday is July 16th so I guess that’s why I notice 16:07 so much.  I was once told 11:11 has something to do with angels…maybe I have a guardian angel or maybe it’s because my name is Angela?

My family often comment that Kevin is really like my late Grandfather, I do see some similarities like being 6ft3, growing up on a farm, similar interests(CARS!!) but other than that I don’t really see it as much as they do…. Strangely enough they do also share a birthday.  Maybe its a sign from my Grandfather that he approves of Kevin? 😉

I was seated beside a girl I’d never met before at a wedding last year (the groom was my cousin, the bride was her friend) after chatting for a while we figured out that we had some mutual acquantinces.  My friend Kat is her husbands boss, my cousin from the other side of my family has been her  friend since pre-school, her in-laws live next door to Kevin’s best friend AND the biggest shock of all. One of my good friends was secretly dating her brother!!! Six degrees of separation? Or was I supposed to find out my friends secret lover?

Before she got married my sisters name was Cheryl Martin.  Our (Kevin and I) best friends are a couple called Cheryl and Martin! Meant to be?

Early last year a new girl started in our office, her name is Jane Martin, we share a surname but are not related. Bizarrely, my parents were actually going to call me Jane too, Rod Stewart’s Baby Jane was topping the charts when I was born…my Dad changed his mind at the last minute and randomly named me Angela instead! It soon transpired that it wasn’t just the surname Jane and I had in common though, both our Dads are wheelchair bound after being diagnosed with Primary Progressive Multiple Sclerosis in their 20’s and they are both the same age!!! No our Dads are not the same person! Ha!

At the end of last year one of my best friends, Lynsay invited me on a day out in Edinburgh.  Lyns had arranged to meet up with her cousin Margaret who had travelled up from her hometown of Hexham with her friend Catriona to spend a few days in the Capital.  We had a fab day, shopping, lunching, chatting and of course no Edinburgh trip is complete without a few cocktails.  FastForward 5 months and I get a text from Lynsay…

…it’s true we’re cousins too and didn’t even know it!!

My friend from work Kirsten is running a 10K next Sunday, she’s a newbie runner and was asking me for some tips about running…yeah ME, obviously she hasn’t read this blog lol!  During our chat she mentioned how she thought marathon runners must be off their trolleys, “I mean why would anyone would choose to run 26.2 miles?”

I replied ‘Its on my bucket list, I’d love to run a marathon one day!’  I’d never actually said that out loud before, I’m not even sure if I had even said it in my head before.  However when I opened up my Facebook for a nosey seconds after saying it the first thing on my newsfeed was this… 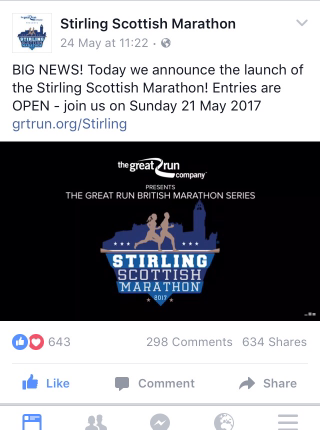 My hometown is hosting a marathon for the first time.  Ever.

Obviously that was a sign, right? So I pretty much signed up for the race there and then!

I keep telling myself I have a year to train but……eeeeek!  I HAVE SIGNED UP FOR A FULL MARATHON!!

Have you ever had any unusual coincidences happen to you?

Do you believe in synchronicity?

Thanks for reading💗
Have a great day 😊
Angela xo

9 thoughts on “Coincidence or Synchronicity?”